Who Owns The Land of Israel?

The ensuing discussion about the right of the Jewish people to the Land of Israel, inspired the writing of this article.

Very few people know about the fundamental difference between the Jewish religion and other religions. This article is not a discussion of the views and values of the religions, nor is it a comparison of religious beliefs. The objective of this article is to highlight one fundamental core difference which is rarely known or understood. Unfortunately, it is the ignorance of this difference which lies at the root of many religious and political conflicts surrounding the Land of Israel.
Other Religions

Most religions promote conversion of others into their faith. Christians and Muslims, for example, are religiously required to proselytize their religion.

The Crusades were a series of military campaigns waged by Latin Christians to promote the Christian religion among non Christians. The Crusades were fought against Muslims, Slavs, Jews, Russians, Greeks, Mongols, Cathars, Hussites, Waldensians, Old Prussians, and political enemies of the popes. Through proselytizing, many countries have become Christian countries, even though they had no national or ethnic or ancestral connection to Latin European Christians.

The "Jihad of the sword" is the religious duty of Muslims to proselytize their religion. Jihad has been applied to offensive aggressive warfare to spread Islam among non-Muslims. Beginning with the first generation of Islam in Saudi Arabia, jihad ideology inspired the conquest of non-Muslim populations, forcing them to covert. Through Jihad, many countries have become Muslim countries, even though they had no national or ethnic or ancestral connection to Saudi Arabians.

When Christians pray in their churches, and, Muslims in their mosques, they know that those who sit near them are not necessarily their blood relatives. They share the same religion, but, they are not descendants of the same ancestors. Christians know that they are not blood relatives of each other or of the Latin European Christians. Muslims know that they are not blood relatives of each other or of the original Muslims in Saudi Arabia. The concept of sharing the same religion as an indication of also being blood relatives is so foreign to them, that most of them cannot even comprehend such a possibility.Judaism takes the exact opposite approach to proselytizing. Proselytizing is prohibited. Conversion of gentiles to Judaism is NOT a goal in the Jewish religion. Conversion is highly discouraged and undesirable. Anyone who wants to convert to Judaism is actively discouraged by the orthodox Rabbis from doing so. Intermarriage is also prohibited. A gentile who marries a Jew is NOT considered to have entered Judaism. Occasionally there are gentiles who want and try, on their own, to convert to Judaism. If they are sufficiently motivated they will be accepted. Their percentage, however, is minuscule. Large-scale mass conversions are also impossible, and never occurred in history, because they are prohibited by the tenets of the Jewish religion.

Judaism is a nationality of blood relatives who are all descendants of the same Biblical forefathers. Jacob, the son of Yitzchak, the grandson of Abraham, had a second name - Israel. All the Jews in the world are collectively called (in Hebrew) "Bnei Israel" - "The Children of Israel". This is not a symbolic name or some kind of a religious designation. This is a literal statement of the fact that they are all biological descendants of the Biblical forefather - Israel.

Gentiles often pose to Jews a controversial question: "How do you know you are a direct biological descendant of the Biblical forefathers?"  Now we know the answer.

One question which puzzles many researchers is: "Why do Jews in some locations look like the local gentiles?" In most locations the Jews do not look like the gentiles. In a few locations, however, they do. Isn't it an indication that these Jews are locals who all converted to Judaism, and therefore, they are not biological children of Israel?

Before we answer this question, it is important to emphasize again that mass conversions of populations are prohibited in the Jewish religion.

To understand the answer to this question we need to take a look at examples from a different field - the field of environmental adaptation. Adaptation is the process whereby living organisms become better suited to survive in their environment.

Thirteen varieties of finches live on the Galápagos, the famous island group visited by Charles Darwin in the 1830s. The finches have a variety of bill shapes and sizes, all suited to their varying diets and lifestyles. The explanation given by Darwin was that they are all the offspring of an original pair of finches, and that natural selection is responsible for the differences. The popular theories of how long it took for Darwin’s finches to "evolve" from their parent population, range from one million to five million years. However, Princeton zoology professor Peter Grant performed a study of all the Galápagos finches. He showed that all the variations between finches developed following changes in food supply within less than 18 years, and sometimes after only one generation. [3]

The adaptation of the peppered moth over the last two hundred years has been studied in detail. Originally, the vast majority of peppered moths had light coloration, which effectively camouflaged  them against the light-colored trees and lichens which they rested upon. However, because of widespread pollution during the Industrial Revolution in England, many of the lichens died out, and the trees that peppered moths rested on became blackened by soot, causing most of the light-colored moths to disappear due to predation. At the same time, the dark-colored moths flourished because of their ability to hide on the darkened trees. As a result of the relatively simple and easy-to-understand circumstances of the adaptation, the peppered moth has become a common example used in explaining and demonstrating adaptation and natural selection. [4]

Jews have been subjected to persecution throughout their entire history. Their persecution was not limited to just harassment. Large populations of Jews were sometimes murdered, and only those who looked somewhat like the local gentiles were able to hide their true identity and survive. During the rise of Islam, for example, the first encounters between Muslims and Jews resulted in persecution when Muhammad killed the Jewish tribes of Medina. In Morocco, in the 8th century, whole communities were wiped out by Muslim ruler Idris ibn Abdullah.  In Marrakesh, Morocco, more than 300,000 Jews were murdered between 1864 and 1880. And, during world war II, 6 million Jews were murdered in Europe.

Over generations of such persecutions, those who looked like the local gentiles increased in numbers because of their ability to disguise themselves, while the others were murdered. The end result was similar to the fate of the peppered moths in the example above. The Jews who looked like the locals survived and multiplied, while the others did not.

Jews can change their looks and behavior over time; they can change the places where they live or the languages they speak; but, they cannot change their original ethnic national identity. The fact that they spread to other countries does not make them an ethnic part of these countries. The fact that some of them look like the native locals, does not make them native locals. Because mass conversions are religiously prohibited, the native locals could not become Jewish either. Many Jews who live in Turkey, for example, are Children of Israel who were expelled from Spain by the Spanish Christian Inquisition and immigrated to Turkey. They are NOT native Turks.

The Land of Israel

The forefather Abraham purchased the land of Hebron as a burial site for his wife Sarah - the mother of the Jewish people. In addition to the Cave of the Patriarchs, which is the actual burial site, Abraham also purchased a large area of land surrounding it, and paid for it with 400 silver coins. The details, the name of the seller, and the witnesses to the transaction, are all recorded in the Bible [5]. It is important to note that this transaction was done for Abraham's wife - Sarah - the mother of the Jewish people. Only the descendants of Sarah were given rights to this land. Indeed, later on, only the son and the grandson of Sarah (and their wives) were buried there. Abraham's other children, not from Sarah, were not given any rights to this land. Following this purchase, there can be no further dispute as to who owns this land.

The forefather Israel (Jacob) purchased the land on which Shchem (Nablus) is now built. The transaction, the sellers, and the purchase price, are recorded in the bible [6]. Following this purchase, there can be no further dispute as to who owns this land.

King David purchased the land of the Jewish Holy Temple in Jerusalem, for the Jewish people - the Children of Israel, approximately 850 years BCE. He paid for the land with hundreds of gold coins. The transaction, the name of the seller, and the purchase price are recorded in the Bible [7]. Following this purchase, there can be no further dispute as to who owns this land.

If it were only the Bible referring to the land of Israel as belonging to the children of Israel, then, Muslims, who also claim to own this land, could argue that they don't accept the Bible's authority. However, The Muslims' Quran also refers to this land as belonging to the children of Israel. In addition to the quotes from the Quran shown above [1][2], The Quran also states: "Moses said to his people ... O my people, enter the Holy Land which Allah has assigned to you." [8]. In this verse, the Quran explicitly states that God (Allah) assigned the Holy Land to the people of Moses - the Children of Israel.

The Muslims have long ago recognized that the Holy Temple is a Jewish holy site. Its name in Arabic is "Al Quds" - "The Holiness" in English,  which is an abbreviation for "The House of Holiness" - The Jewish Holy Temple. The fact is that Jerusalem is not important enough to the Muslims to be mentioned even once in the Quran, while Mecca and Medina, the only two Muslim holy cities, are mentioned hundreds of times. Even when the Jordanians occupied Jerusalem, up until 1967, they never considered it their capital, and Arab leaders did not come to visit.

When the Muslims in Jerusalem pray in their mosques, even in the "Al Aktza" mosque built on the edge of Temple Mount, they actually stand with their back turned to Temple Mount. And, when they bow down in their prayers they show their behind to the site of the Holy Temple. How consistent is that with considering it a Muslim holy site? 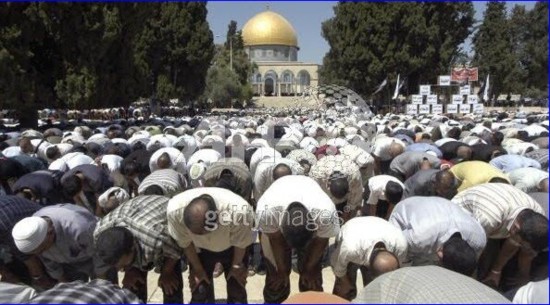 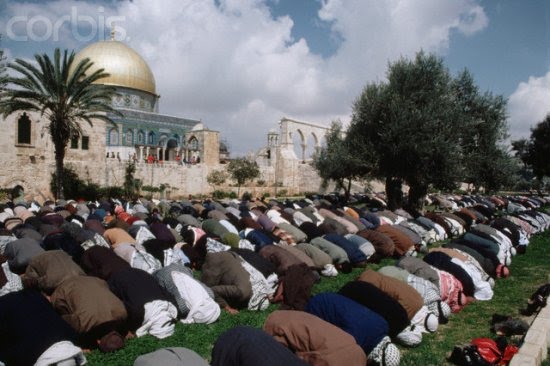 Muslims praying on Temple Mount point their behind to the site of the Holy Temple.
(Photo courtesy imageshack.us)

Thank you for your posts. It is so heart-warming to see the people who tell the truth.